Build This Tibetan Magic Copper Earring Kit for only $9.95!!!

TIBETAN MAGIC BEADS have long been valued by Westerners for many centuries. So many occult powers can be attributed to Tibetan Magical Beads that merely listing them would take up the entire instruction sheet. Look on the internet for more information about Tibetan Buddhism, and experience the power of Tibetan Magic yourself, by wearing your very own Jewels of Ancient Lands Tibetan Magic Earrings!Here's what you should have received in your kit, each packaged in its own zip-lock baggie, tagged for quick identification -- check each item off this list to make sure you have everything you're supposed to have in the kit:

The wires were all cut with one end flush, so you don't have to re-cut the wires, just bend them at the flush-cut end. The other end will be clipped or hammered, so don't worry about cutting both ends; it isn't necessary if you do your hammering well.

Always save your clippings -- they are worth money, and you will be amazed at how fast the scrap adds up, even though your wires are pre-sized to fit the project requirements.

The tools required for this project are:

First we start with the Core Element. Make your Cores with two of the .20 gauge wires provided in the kit. Take your time and make them right. Using your needlenose pliers, gently COAX the wire into the shapes you want them to be, and using your flush-cutters, trim the wire after making the loop and winding the wire back on itself, as shown above.

Make certain that there are no sharp points where you cut and trimmed the wire. Be sure to trim the wire so that the FLUSH side remains and the SHARP side is removed; keep the FLAT side of your flush-cutters to the FINISH or client-side of the wire. Feel the end to determine if you've done it right. If not, you'll have to trim it slightly once again, leaving less copper wire to work with, so be careful the first time.

Don't RUSH through the project; that's a sure way to louse it up. A few seconds won't make any dent in any endeavor.

Make BOTH Core Elements at this time, then proceed to the next stage:

Be super-careful not to put too much pressure on the Tibetan Core Bead. Try to maintain a weaving trance-dance state during this maneuver. You can use my trance-dance CDs to achieve the right work-rhythms.

Keep in mind that you are using the same tools that YOU used almost 7,000 years ago, except that instead of being made of bronze, they're now made of modern steel, so they last longer and don't need to be repaired every few days, as the much softer ancient bronze instruments demanded. Aren't you glad of that?

The techniques you are using are also the exact same ones that YOU used some 7,000 years ago, and you'll find that if you perform these tasks at an outdoor event, you will not need electricity to run your tools. Everything is done by hand, with tools that were in common daily use back in 4,500 B.C. and even earlier.

Now you're going to form the ear-wires directly onto the Core Element. Thread one of the longer .20 gauge wire through the top loop of the Core Element, so that about 40mm, or 1 1/2", sticks out the other end.

Make a nice large loop, enough to allow good swing and tilt, and finish the loop by winding the wire back onto itself, as shown below: 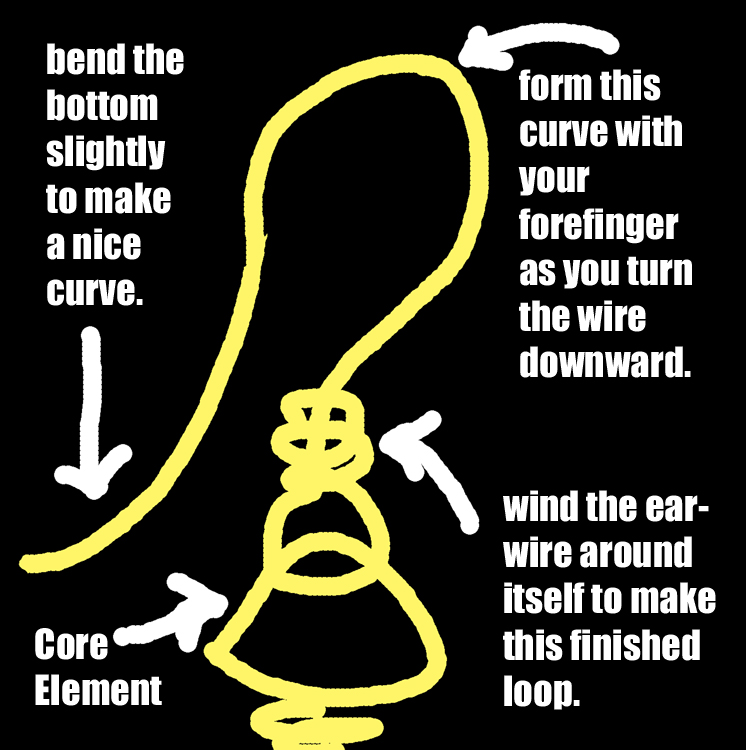 Attach the ear-wires directly to the top loop of the Core Elements as shown.

You should now have the ear-wires attached to the tops of the Core Elements on both earrings, and you're ready to to go the next step, where you'll make and attach your paddles, articulated bangle drops on the bottom of your earring elements, as follows: 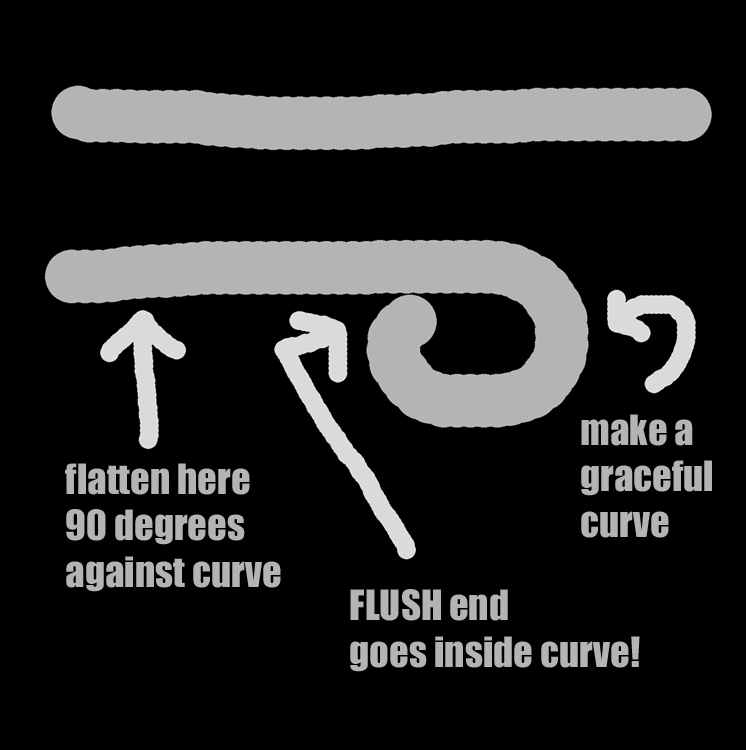 Make your paddle bangles as indicated.

Open your packet of .20 gauge short wires. There should be 10 of them. You only need 10, five for each earring, and if you make a mistake, you can use some of the trim from the core or ear wires.

Remember that ALL scraps, all trims and cuts, should be saved, and many of them will be long enough to make something out of it, once you know how, and all the info is available FREE on JewelsOfAncientLands.com. It also appears in book form, if you want it in hard-copy. 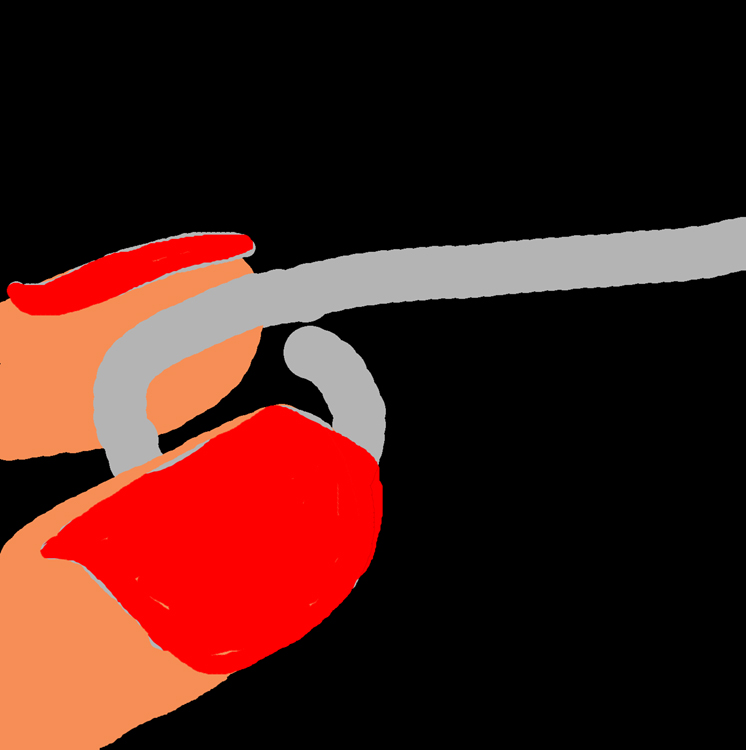 Hold the paddle wire this way when you hammer the tip.

Working your way from the sharp tip toward the loop, hammer gently and let the weight of the 2 oz. hammer do all the work for you. Keep the flat of the hammer exactly even with the vise, anvil or steel strike-plate, so the silver doesn't get dinged from the edge of the hammer-head.

As you hammer the very end, you'll note that if you did it right, the sharpness will vanish, and the end will form a perfect tear-drop shape. Following the wire up toward the loop, GENTLY tap it to help it keep its shape. Do NOT flatten the wire except at the bottom, the formerly sharp end, which presumably now has a nice rounded tip with no sharp edges.

attach the paddles by opening and closing the top loop of the paddle.

Open the loop of the paddle to the SIDE, not outward. Do not make the loop larger by doing this operation. The loop stays the same size, and the end moves a bit to the left as you attach it to the bottom loop of the Core Element. 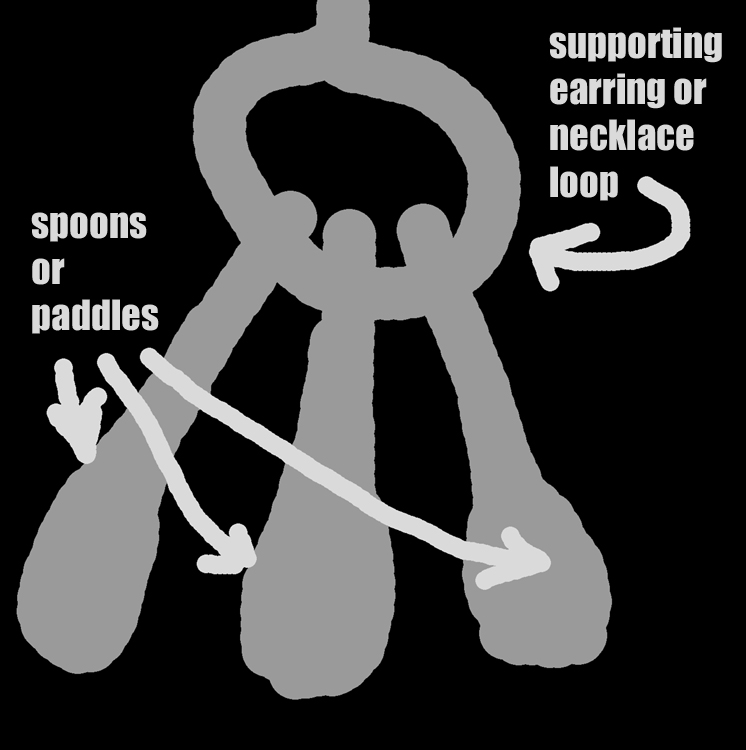 This is what it looks like when the paddles are attached correctly.

Try to get all the paddles facing the same way, if you can figure out how to do that, but don't worry over it, unless you're a fanatic for neatness. The paddles work either way they're put on, frontward or backward.

You'll put FIVE paddles on each earring, keeping back two for future use. Do not attempt to put six paddles on the bottom loop. It will look overcrowded, and three aren't enough to make a good flashpoint on the earring.

Be sure to check ALL the places on BOTH earrings where sharp points might still be lurking, and polish them smooth with a Dremel and some Green Jeweler's rouge, or GENTLY and SLOWLY file them down with your EXTRA-FINE or FINE rat-tail or ring file, taking care not to score the metal as you do this cleanup operation.

Now use your Jeweler's Polishing Cloth to get them sparkling, and they're ready to sell.

Congratulations! You have just made a powerful Tibetan Magic Earring Set! Whether you wear your Tibetan Magic earrings or sell them, you will never forget this life-changing event.

RETAIL ... $19.95 includes everything needed to make one pair of TIBETAN MAGIC Earrings in SOLID copper.

WHOLESALE ... $9.95 for the entire kit as stated above. No further discounts on kits. SUBJECT TO AVAILABILITY.

You can order as many TIBETAN MAGIC Copper Project Kits as you want, at $9.95 per kit, with a 5 kit minimum to get this wholesale price. What a great way to engage Powerful Quantum Entanglement with your own very ancient past!!!